And Now the Ethnic Crisis 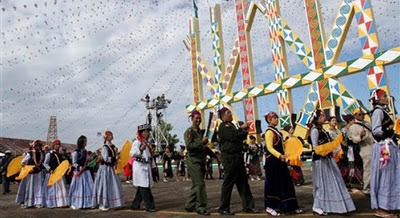 Following moves by Naypyidaw to enact democratic reforms, several leading figures and organizations in the international community have called for Burma to resolve issues concerned with its ethnic minorities, especially in tackling human rights abuses in the ethnic areas, and ending the government's ongoing conflicts with ethnic armies.

On Wednesday, human rights envoy Tomás Ojea Quintana addressed the United Nations General Assembly’s third committee in presenting his latest report on Burma.
“A pattern of gross and systematic violations of human rights has existed in Myanmar for many years,” Quintana said. “I continue to receive allegations of such violations to date. Measures to ensure justice and accountability, including access to the truth, are essential for Myanmar to face its past and current human rights challenges and to move forward towards national reconciliation.”

While welcoming Burmese President Thein Sein’s commitment to “keep the door open to peace” and to invite armed groups for peace talks, Quintana called for greater efforts to find a durable political resolution to the complex undertaking of forging a stable multi-ethnic nation.

Currently, more than 30,000 civilians from Kachin State have been displaced and have sought refuge due to an ongoing armed conflict between government troops and the rebel Kachin Independence Army (KIA).

The majority of those displaced are stranded in makeshift camps along the Sino-Burmese border where local aid groups say they face food shortages.

Sources in the area have claimed that hundreds of Chinese soldiers are deployed along the border in order to block Kachin refugees from crossing into China.
Awng Wa, the chairman of the Kachin Development Networking Group, told The Irrawaddy that hostilities—whether minor exchanges of gunfire or major assaults—currently break out almost every day in Kachin State.

He said that on Wednesday night a unit of government troops burned down a village called Namsam Yang, about 10 miles from the KIA's headquarters in Laiza, and shot a villager who was over 60 years of age in his home. The man has been hospitalized at the Sino-Burmese border, he added.

A report issued in early October by the Kachin Women’s Association of Thailand also accuses government troops of systemic rape and sexual violence against Kachin women.
The report, titled “Burma’s Covered Up War: Atrocities Against the Kachin People,” alleges that government troops have raped 37 women and girls, 13 of whom were killed, since the renewal of the conflict in June.

US's special envoy to Burma, Derek Mitchell, said on Monday that the reports of human rights abuses in Burma were “credible,” and noted that many of the incidents were against minority women and children.

According to those NGOs involved in distributing humanitarian aid to displaced persons in Burma and to refugees, at least 500,000 ethnic Karen, Karenni and Shan people are displaced in the jungle, having abandoned their homes due to attacks launched by government troops.

Some 145,000 persons, mostly Karen villagers, are currently sheltering as refugees at camps along the Thai-Burmese border.

Ethnic leaders have joined in the calls for Naypyidaw to persuade its military officials to withdraw all their troops from ethnic areas and hold negotiations with representatives of all the groups.

In his statement, Derek Mitchell said that the Burmese government has not made comparable progress in its relations with ethnic minorities in the north and east of Burma as it has with the democratic opposition.

Meanwhile, US Assistant Secretary of State Kurt Campbell, a US diplomat who has been involved in Burma issues for several years, said on Thursday in an interview with The Nation news group in Bangkok: “The thing we are looking for is progress with the National League for Democracy and Aung San Suu Kyi, and domestic diplomacy with ethnic minority groups, many of whom are subject to terrible violence and abuse.”


http://www.irrawaddy.org/article.php?art_id=22297
Posted by OVERSEAS KACHIN ASSOCIATION at 6:46 AM

Email ThisBlogThis!Share to TwitterShare to FacebookShare to Pinterest
Labels: English