Chiang Mai (Mizzima) – In the latest round of fighting, Burma’s armed forces continue to commit serious abuses against ethnic Kachin civilians, according to a statement released on Tuesday by Human Rights Watch (HRW). 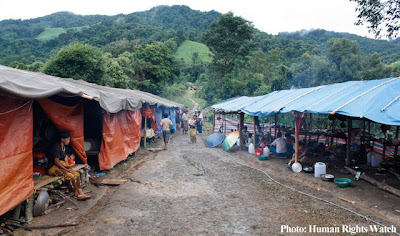 A temporary camp for Kachin refugees who have fled from the renewed fighting by the government and Kachin Independence Army in Kachin State. Photo: Human Rights Watch

The New York-based group said that since the 17-year cease-fire was ended by a Burmese army offensive against the Kachin Independence Army (KIA) on June 9 this year, the Burmese government has committed a wide range of human rights abuses against Kachin civilians.

“Burmese armed forces have been responsible for killings and attacks on civilians, using forced labour and pillaging villages, which has resulted in the displacement of an estimated 30,000 Kachin civilians, ” the HRW statement said.

Fear from abuses by the Burmese army has led tens of thousands of villagers to abandon their homes, many ending up in remote aid camps, HRW reported. Many civilians have spent weeks in hiding in the jungle during the rainy season to escape the Tatmadaw, or Burmese armed forces.

HRW conducted a fact-finding mission to conflict areas in Kachin State in July and August. “Witnesses described serious abuses committed by Burmese soldiers, including killings and attacks on civilians, pillaging of villages and the unlawful use of forced labour,” said HRW.

The statement contained testimony from villagers who have suffered abuses. In one case, a 33-year-old woman said that before the current fighting she had been forced to carry provisions up a two-mile road to a Burmese army outpost while she was six-months pregnant. “I had to do forced labour for the Burmese soldiers many times…the food we brought ourselves to eat. They didn’t feed us,” she told HRW.

The group also documented cases of killings of civilians, and said that villagers confirmed to HRW that rape cases had occurred in the conflict areas. Some civilians have been killed in searches by the Burmese army for suspected associates of the KIA, HRW reported.

According to HRW, “Under the laws of war applicable in conflict areas in Burma, all sides are prohibited from mistreating persons in their custody, targeting civilians, or pillaging homes and other civilian property.”

The group said that continued abuses by the Burmese army have again highlighted the need to establish a United Nations-backed Commission of Inquiry (CoI) into crimes against humanity in Burma.

HRW senior Burma researcher, David Mathieson told Mizzima that a CoI on Burma could “potentially be an important mechanism for combating impunity and establishing accountability. In the absence of any other such domestic or international initiative, the normative and constitutional immunity of the Burmese military to end impunity, the captured legal system that refuses to investigate serious conflict related abuses, and the culture of denial of serious breaches of international humanitarian law and human rights law in Burma, there aren’t many better proposals out there.”

An estimated 30, 000 refugees have been displaced due to the latest round of fighting. Photo: Human Rights Watch

The UN special rapporteur for human rights in Burma, Tomas Ojea Quintana, first called for a commission of inquiry in March 2010. To date 16 countries have pledged their support for an inquiry, including the United States, the United Kingdom, France, Australia, the Czech Republic and others.

Mathieson said that the formation of a CoI should not be seen as an isolated event, but as a continuous process of “ending a sense of entitlement to violate human rights within the Tatmadaw.”

“The new government has shown no inclination to start that: what is needed is not a change of command, but a change in the culture, and that is the only way to address systematic abuses,” he said.

He said that International Labour Organization’s (ILO) established complaints mechanism in Burma could be an important model for any eventual CoI into human rights abuses. The ILO complaint mechanism is “the product of more than a decade of ILO engagement with Burma on forced labor, and that started with a CoI in 1998,” Mathieson said.

“The ILO was instrumental in decreasing widespread forced labor in urban and rural areas in Burma and that came through a combination of on-the ground investigations and calibrated international pressure. A similar formula could be employed on many other abuses that continue,” he said.

The culture of denial in the military in Burma stops progress in fostering accountability and improving justice for victims in the country, observers say. On the use of rape in ethnic areas by the Burmese Army, Mathieson told Mizzima, “Sexual violence continues because the government denies its forces are perpetrating it.”

“Impartial investigations and adequate punishments, and a clear command instruction that this abuse will not be tolerated are the first steps to ending it, and the Burmese army hasn’t even done these,” he said.

Until accountability can be fostered in the military, the civilians living in the ethnic areas of Burma, especially where there is ongoing conflict, are at severe risk, say observers.

“Pronouncements of political reform in Burma do not seem to have reached the army in Kachin State. Ongoing abuses starkly demonstrate that until real steps are taken towards accountability, including an international commission of inquiry, minorities such as the Kachin will be a grave risk,” Elaine Pearson, deputy Asia director at HRW, said on Tuesday.

Burma’s human rights record of abuses by the military has stopped it gaining ground on the international circuit, and is a key reason for states upholding sanctions against the country.

Derek Mitchell, the US special representative and policy coordinator for Burma, said Monday on Burma’s relationship with the United States: “We made it very clear that we could not have a transformed relationship as long as these credible reports of abuses occur, and there is no dialogue with these groups and with the opposition,” AFP reported on Monday.
Posted by OVERSEAS KACHIN ASSOCIATION at 12:31 PM

Email ThisBlogThis!Share to TwitterShare to FacebookShare to Pinterest
Labels: English